Choosing a career path can seem daunting, especially when an economic recession complicates the process of finding work. Some people may be unsure about what they want to do, whereas others simply want to break free from tedious work and find a job that actually interests them. Fortunately, John Holland’s theory regarding career choice provides young adults with a framework for selecting a suitable vocational path.

Holland has asserted that career development involves the relationship between a person and his or her environment; he also believes that both biology and environmental influences, such as family and culture, play a role in career interests. Furthermore, he has theorized that people develop an interest in certain jobs based on the stereotypes that surround them. A college student, for example, may be interested in becoming a doctor after learning about the six-figure salary and high level of respect typically associated with such a profession.

It may seem like stereotyping certain jobs can be harmful, but according to Dr. Colby Srsic, a counseling psychologist in Worthington, Ohio, the beliefs people hold about jobs can actually be projective and provide job-seekers with relevant information regarding certain career paths.

As people develop interests in certain jobs, they begin to represent one of Holland’s six person types. In fact, Holland believes that all people can be categorized by their resemblance to one of the following types: realistic, investigative, artistic, social, enterprising, and conventional.

Each person typically has a primary “type,” which is the most powerful indicator of his or her interests. Paper writers must also consider their secondary “types.” A person may, for example, score high on the realistic scale, but also score relatively high on the enterprising scale. Both “types,” then, should be taken into consideration when he or she engages in career-planning.

A person who chooses a career that is compatible with his or her specific type(s) is more likely to be successful. In other words, a social person who is employed in social job will understandably be more motivated than a social person working in a job classified as conventional. Individuals in careers congruent with their interests are also more satisfied in their jobs, in addition to being higher-achieving and more stable than those whose jobs do not suit their interests, according to Srsic.

Characteristics of the Six “Types”

Each “type” is characterized by specific personality traits, and has jobs corresponding with it. 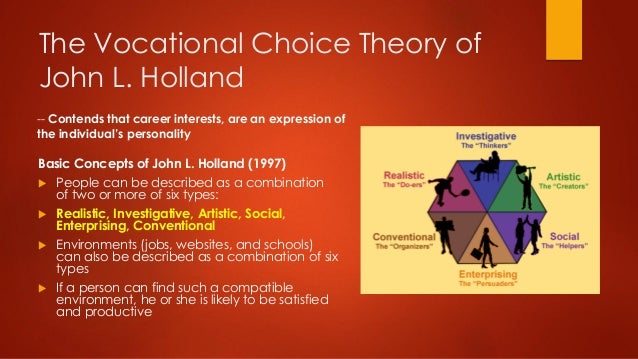 Realistic people prefer jobs that involve physical skill and coordination. They tend to shy away from work that requires verbal communication, and they are often not fond of theory and research. They prefer to complete their work and solve hands-on problems. Farmers, electricians, heavy equipment operators, industrial arts teachers, and coaches tend to be realistic.

On the opposite end of the spectrum, investigative individuals prefer analytical research and logical problem-solving. They choose thinking in favor of acting, and they tend to have a strong interest in the sciences, including both biological and social sciences. The following jobs are considered to be investigative: chemical engineer, college professor, pharmacist, marine scientist, and dietician.

Artistic individuals are independent, and they value self-expression. They tend to be emotional and dislike structure, valuing creativity and aesthetics. Film editor, essay writer, journalist, musician, interior designer, and photographer are artistic careers.

Unlike social individuals, those who are classified as enterprising tend to be involved in the business world. They seek prestige and status and are typically assertive and persuasive. They are known as leaders, and may be interested in the following types of jobs: lawyer, marketing specialist, business executive, insurance agent, and realtor.

Also found in the business world, conventional people tend to be orderly, detail-oriented, and committed to their work. Completely unlike artistic people, those who are described as conventional often value structure, self-control, and organization. The following careers are suitable for conventional individuals: accountant, office manager, banker, actuary, mathematics teacher, and financial analyst.

Many people can predict their “type” simply by reading descriptions, but for a more detailed analysis, individuals unsure about their ideal career can take a professional test such as the Strong Interest Inventory or visit a career counseling center on a college campus. Free career tests are also available on-line.

After determining their "type," job-seekers may be interested in exploring career options in the following fields: 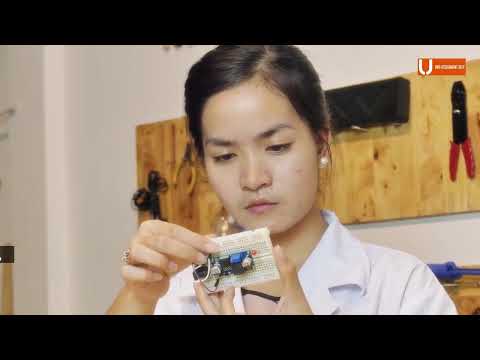 Petroleum engineers make the most money of any engineering field, but chemical engineers have the highest job and career satisfaction.